INSIDE THE MIDDLE EAST 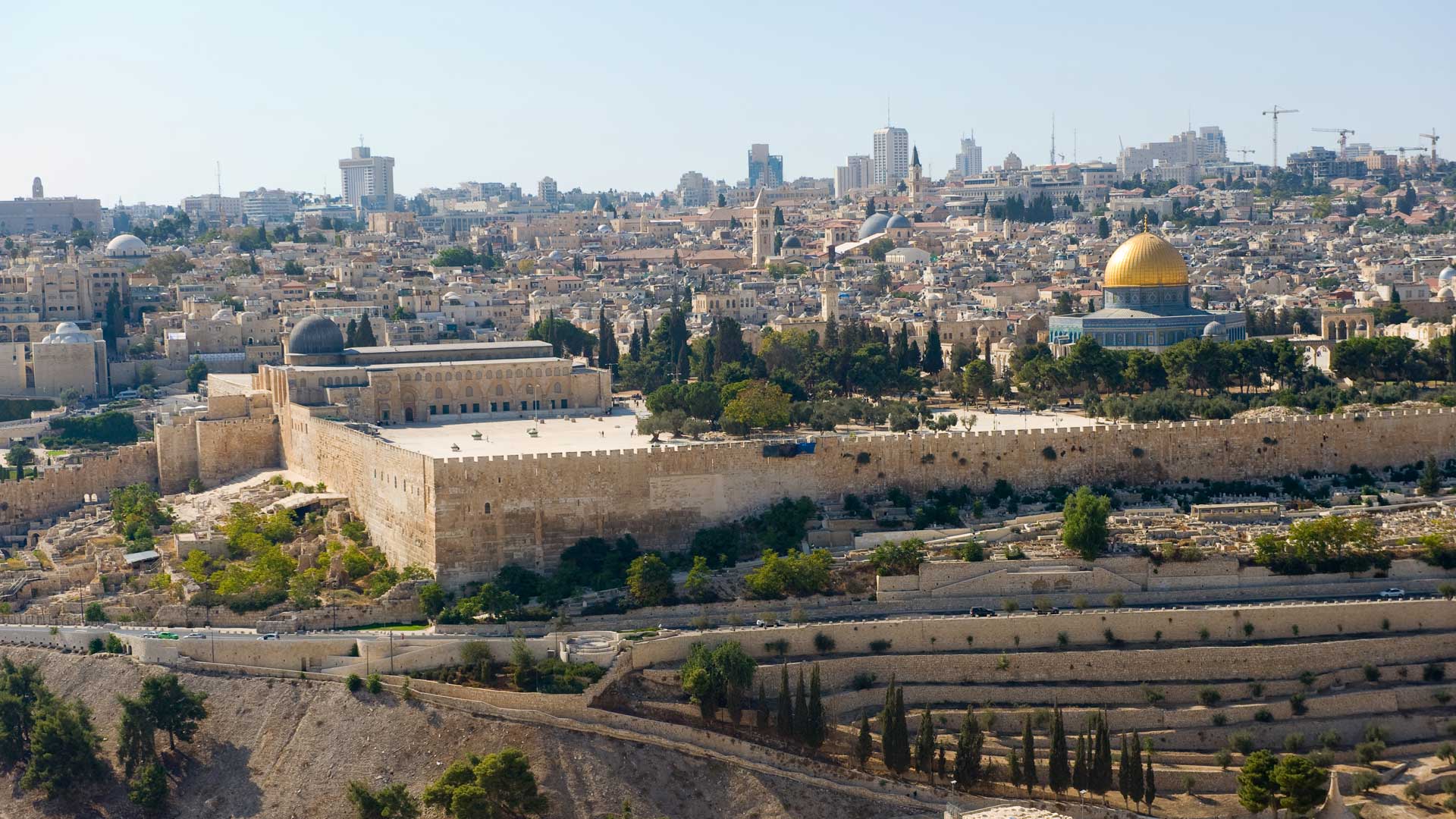 In April 2022, Muslims mark the holy month of Ramadan. Throughout April, violent clashes took place in the al-Aqsa compound in Jerusalem between Palestinians and Israeli police. The Palestinians argue they are “Defending al-Aqsa.”

The slogan ‘defending al-Aqsa’ has been prevalent in the Muslim world since the early days of the Israeli – Arab conflict. The narrative particularly gained momentum after the 1967 war when Israel liberated – or occupied (depending on who is speaking) Jerusalem.

This article is audio enabled

In Arabic, the Temple Mount Compound is called al-Haram al-Sharif, “The Noble Sacred Compound.” On al-Haram al-Sharif, two important symbols of Islam were built during the Islamic conquests of the late seventh and early eighth centuries. One is the Dome of the Rock, and the other is the al-Aqsa Mosque. Al-Haram al-Sharif – which has also become known over time as the al-Aqsa compound – evolved to be the third holiest site in Islam (the first is Mecca and the second is Medina – both are located in the Arabian Peninsula – Saudi Arabia of today).

For centuries al-Haram al-Sharif was ruled by Muslims. And particularly the Turkish Ottoman Empire, which came to an end at the end of the First World War. Between 1948 and 1967, the Hashemite Kingdom of Jordan controlled the al-Aqsa compound. In the 1967 War between Israel and the Arab states, Israel occupied or reunited – again, it depends on who is speaking – Jerusalem.

In the Muslim world in general, and the Arab world in particular, the call to “Liberate al-Aqsa” is a compelling and powerful concept – culturally, emotionally, politically, and religiously. On one level, For Muslims around the world, the slogan “Defending al-Aqsa” expresses an authentic sense of fear among Muslims that the compound is in danger of being destroyed.

In the 1980s, the Israeli security services uncovered an underground movement of militant radical Jews who carried out terrorist attacks against Palestinians. The group was also planning to blow up the Dome of the Rock. The members of the underground were sentenced to lengthy prison terms.

However, on another level, the slogan “Defending al-Aqsa” is often a tool that leaders in the Arab and Muslim world use to further their own political agendas. Furthermore, various factors in the Arab and Muslim world often employ the slogan to discredit or gain the upper hand over their rivals. In my new book Inside The Middle East – Entering A New Era (2022), I discuss this issue at length and give many historical and contemporary examples from across the region.

The latest round of violence in the Al-Aqsa compound, which took place during the Muslim holy month of Ramadan (April 2022), provided further examples of how the narrative of “Defending Al-Aqsa” is used as a tool in the service of the agenda of regional Arab politics.

There are many examples of this. But I would like to highlight how the issue of al-Aqsa became part and parcel of a conflict between two Arab countries that are thousands of kilometers away from Jerusalem – Algeria and Morocco.

In January 2022, Algeria hosted a conference attended by various Palestinian organizations. The conference was ostensibly intended to reconcile the two central Palestinian powers Hamas (that rules the Gaza Strip) and Fatah (the largest party in the Palestinian Authority that rules parts of the West Bank), that have been at odds since 2007. I say ostensibly because everyone – and especially the host, Algeria – knew it was a show. No one really expected the conference to yield a reconciliation agreement. And indeed, the meeting, of course, ended with nothing.

Algeria’s real goal for hosting the conference was to enhance its image as an Arab country that cares about the Palestinians and to further emphasize Algeria as a leading factor in the Arab world.

Morocco, on the other hand, has a history of close ties with Israel. In December 2020, Morocco and Israel signed a normalization agreement officially strengthening their relationship. Since then, the two countries have signed dozens of agreements in a wide variety of various fields. In addition to enhancing cooperation in areas such as tourism and trade, in November 2021, the two signed an agreement in which Israel will sell advanced Israeli weapons systems to Morocco.

Relations between Morocco and Algeria have been strained for decades.

Morocco accuses Algeria of funding and supporting the Polisario Front. This nationalist organization wants to make the Western Sahara (which is part of Morocco) an independent entity.

Algeria accuses Morocco of funding and assisting the movement for self-determination of Kabylie (MAK), a nationalist Berber-based movement that seeks autonomy in the province of Kabylie in Algeria.

Algeria accuses Morocco of betraying the Palestinian cause.

Occasionally there have been incidents of exchanges of fire on the long border between the two countries.

As relations between the two deteriorated, in August 2021, Algeria severed ties with Morocco.

What is the connection between the violent events that took place in April 2022 in the Al-Aqsa compound and Algeria and Morocco?

Against the background of the April 2022 violence in the al-Aqsa compound, the Arab Ministerial Committee on Al-Quds Affairs, also known as the Al Quds Committee, chaired by King Mohammed VI of Morocco, issued an official statement condemning Israel for allegedly violating the status quo in the al-Aqsa compound. The statement praised the role of His Majesty King Mohammed VI as the defender of the Islamic sites in Jerusalem.

Algeria demanded that the announcement also glorify the role of its president Abdelmadjid Tebboune in defending al-Aqsa. But the committee rejected the demand.

Algeria was furious that the committee refused its request. Therefore, it refused to support the statement condemning Israel. Algeria expressed “reservations” regarding the official announcement of the Arab Ministerial Committee on Al-Quds Affairs.

This episode – like many others – teaches us that often the reality is that using the slogan as a tool is what is important.

Actually, defending or liberating al-Aqsa in practice is less of a priority.

The call to “defend / liberate al-Aqsa” is part and parcel of Middle East politics. They are intertwined. You cannot separate the two.

On the one hand, the call to “defend / liberate al-Aqsa” fuels Middle East politics. And on the other hand, political agendas, priorities, and rivalries between various Middle Eastern players fuel that call…

Understanding that loop and knowing how to navigate that highly sensitive, complex issue is essential for any decision-maker that wants to create constructive, effective, and productive Middle policy.

Avi Melamedhttps://insidethemiddle-east.com
Avi Melamed is an expert on current affairs in the Arab & Muslim World and their impact on Israel & the Middle East. A former Israeli Intelligence Official & Senior Official on Arab Affairs, Fluent in Arabic, English, and Hebrew, he has held high-risk Government, Senior Advisory, Intelligence & Counter-Terrorist intelligence positions in Arab cities & communities - often in very sensitive times - on behalf of Israeli Government agencies. He is the Founder & CEO of Inside the Middle East | Intelligence Perspectives - an apolitical non-partisan curriculum using intelligence methodology to examine the Middle East. As an Author, Educator, Expert, and Strategic Intelligence Analyst, Avi provides Intelligence Analysis, Briefings, and Geopolitical Tours to diplomats, Israeli and foreign policymakers, global media outlets, and a wide variety of international businesses, organizations, and private clients on a range of Israel and Middle East Affairs.

The uprising in Iran is a struggle over identity, this is why, For USA TODAY

The uprising in Iran is a struggle over identity, this is why, Originally published in USA Today | 2022 November 30 issue as well...

Avi Melamed interview on JBS | In the News: Security Escalation in Israel | 2022-11

Avi Melamed’s Insight about the Lion ’s Den terror group keeps getting quoted. Read the article in the JewishPress by Hana Levi Julian -...

Avi Melamed in the Financial Times

After USA Today this week, we are pleased to let you know that some insights of Avi Melamed are quoted in the Financial Times. Upsurge...

The uprising in Iran is a struggle over identity, this is why, For USA TODAY

Avi Melamed interview on JBS | In the News: Security Escalation in Israel | 2022-11

THE HUB by ITME

The UAE Resistance Union Against Normalization